Shadow banking is back in public light. The FT has just started a series on it. On the pages of the same FT, Mark Carney, Bank of England governor and crucially, chairman of the Financial Stability Board (FSB), recently outlined the reforms that the FSB has introduced to transform shadow banking into governable market-based finance:

The reader will be tempted to believe that reform of repo markets, six years after the fall of Lehman Brothers and the run on repo it triggered, is progressing smoothly. This is an important front in the macroprudential battle, according to Carney, because:

Securities financing markets fed boom-bust cycles of liquidity and leverage. Ample liquidity and low volatility drove increasing availability of secured borrowing. That created a self-reinforcing dynamic of more leverage, even greater liquidity, lower volatility and even greater access to secured borrowing. When confidence evaporated, that process went sharply into reverse. Markets seized up, investment vehicles – the size of which had tripled in the three years before 2007 – failed, and money market funds experienced runs.

The quote, echoing closely the FSB position, suggests that repos enable leverage and create cyclical liquidity in the markets used as collateral. Cyclicality is sharpened by margining practices: low in upswing, and high in periods of market tensions. Why so? Haircuts/margins are a risk management practice, designed to protect the cash lender (the legal owner of collateral for the duration of the repo) from the risk that it would not be able recover all its cash by liquidating collateral if the repo counterparty defaults. Thus, haircuts reflect expectations of the underlying volatility (and liquidity) of the market where collateral is traded.

Yet Carney fails to acknowledge that, under his chairmanship, the FSB's repo reforms have lost steam under intense lobbying pressure from central banks, private finance and governments. Consider his claim that 'minimum margin requirements are being developed to reduce the cycle of excessive borrowing in economic booms that cannot be sustained when liquidity dissipates in core fixed-income markets'.

Initially (throughout 2011 and 2012), the FSB put forward two approaches for setting numerical floors on haircuts: a high level and a backstop level  that would make repo-supported leverage more expensive and reduce risks of fire-sales in a crisis. Both approaches differentiated across residual maturity of collateral and ‘safe asset’ status of collateral, imposing the lowest margins on short-term government bonds.

Targeting the repo instrument was innovative in macroprudential terms because it finally took regulation to the market, beyond the old focus (as in Basel) on institutions. Jeremy Stein, then of the US Fed, argued that this this focus would mitigate the systemic consequences of fire-sales without leaving much room for regulatory arbitrage. Any financial intermediary active in the repo market would have to implement it.

Alas, as most ambitious regulatory initiatives negotiated at global level, the new recommendations were considerably watered down by August 2013, when the FSB issued its latest proposals. What we have now is an open invitation to regulatory arbitrage:

The proposed framework of numerical haircut floors would apply initially to non-centrally-cleared securities financing transaction in which entities not subject to regulation of capital and liquidity/maturity transformation receive financing from financial entities subject to such regulation against collateral other than government securities.

Put differently, repos between banks (around 80% of overall volumes in Europe) and all repos with government collateral are now outside the scope of the FSB. The market-based approach is gone, replaced by a meaningless non-bank counterparties, non-sovereign collateral focus. Even on those transactions, haircuts are half of the initial backstop level.

Why does this matter? Well, according to the FSB’s own calculation, the latest proposals have shrunk the margin-regulated repo space to 8.7% of the repo universe. The 91.3% still engenders the practices of risk management that contain the seeds of the next fire-sales and crisis of market-based finance. 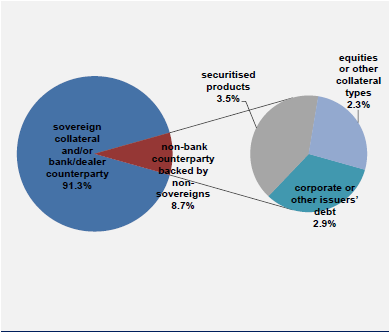 How did this happen? The same actors - central banks, governments, private finance lobbies - that derailed the European proposals on imposing a Financial Transactions Tax on repos, with the same arguments:

None of these arguments hold under close scrutiny. Repos are crucial to risk management in market-based finance, but - governor Carney stresses above - the practices of managing collateral/counterparty risk are pro-cyclical (including mark-to-market). Central banks do use repos for implementing monetary policy, but to target the unsecured interbank market. Use of instrument is not the same as regulatory control over systemic repo practices, or even granular knowledge of what happens in private repos in terms of collateral pledged and margining practices. Government bond markets do benefit from becoming collateral markets, but once there, can be affected by fire sales and haircut spirals during periods of market distress, as Ireland or Portugal know too well (see here for Bank of England own report). Perhaps more ironically, recent reports suggest that it was central banks, through zero-rate policies, that have inflicted damage to liquidity in government bond markets, as short-term investors migrate onto the derivative segment.

Where does this leave Carney’s promises to reform shadow banking? The above demonstrates that, at either global (FSB) or regional (FTT) level, repo reform runs into numerous political economy obstacles. To overcome this, Paul McCaulley, the economist that famously coined the term shadow banking, recently proposed that central banks could, individually, set minimum haircuts including on safe asset collateral, in effect adopting nationally what the FSB proposed and then backtracked from at global level.

This may happen in the US, but is less likely in Europe, where the ECB has been much less vocal in its concerns with regulating repos than the US counterparts. For the ECB, the shift to market-based banking and finance creates serious headaches, since the task of financial stability in such a system requires direct interventions in key collateral markets - including government bond markets - for which it has no mandate. Its response - head in the sand - changed only when Draghi promised to do whatever it takes to stabilize collateral markets (and two years later, Spain's long term borrowing costs are below US).

It is in such uneven landscapes that cross-border regulatory arbitrage flourishes. Expect crises to follow.

Daniela Gabor
i read and write on central banks and things to do with macro-finance. i occasionally rant against mainstream macro, the IMF's crisis conditionality and ideological blindess. I tweet here @DanielaGabor